We are excited to announce the release of Metals v0.7.0 - codename "Thorium" 🎉 The release includes several new features along with bug fixes.

Metals is a language server for Scala that works with VS Code, Atom, Vim, Sublime Text and Emacs. Metals is developed at the Scala Center and VirtusLab along with contributors from the community.

In this release we merged 21 PRs and closed 8 issues, full details: https://github.com/scalameta/metals/milestone/11?closed=1

Check out the website and give Metals a try: https://scalameta.org/metals/

Tree views in VS Code​

There is now a new "Metals" sidebar in VS Code that contains three tree views:

Browse symbols that are defined in jars of library dependencies.

There is a new command "Reveal active file in Metals side bar" that focuses the library and project explorer to the current open file.

Get an overview of all compilations that are ongoing in the build. Previously, only a single compilation progress was reported through the status bar. 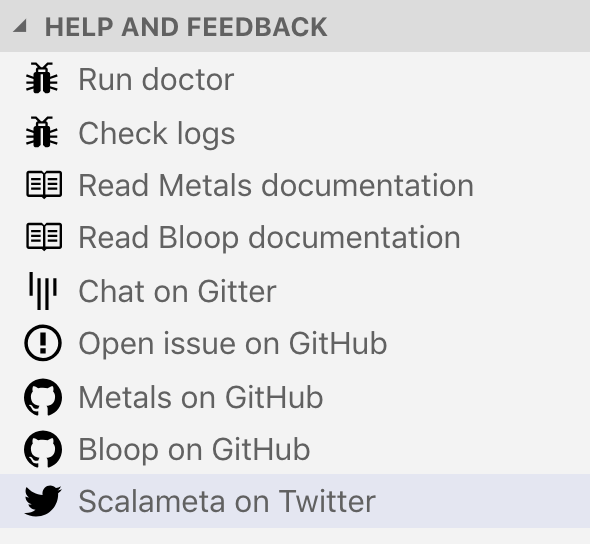 Metals now supports Scala 2.13.0! Please upgrade to Scalafmt v2.0.0 in order to format 2.13-specific syntax such as underscore separators (1_000_000). Note that completions may in rare situations not work perfectly for Scala 2.13, in particular:

Big thanks to @gabro for leading this effort!

Metals can now run on Java 11! To use Java 11 instead of Java 8, point the $JAVA_HOME environment variable to a Java 11 installation.

The VS Code extension will continue to use Java 8 by default, update the "Java Home" setting to use Java 11 instead. 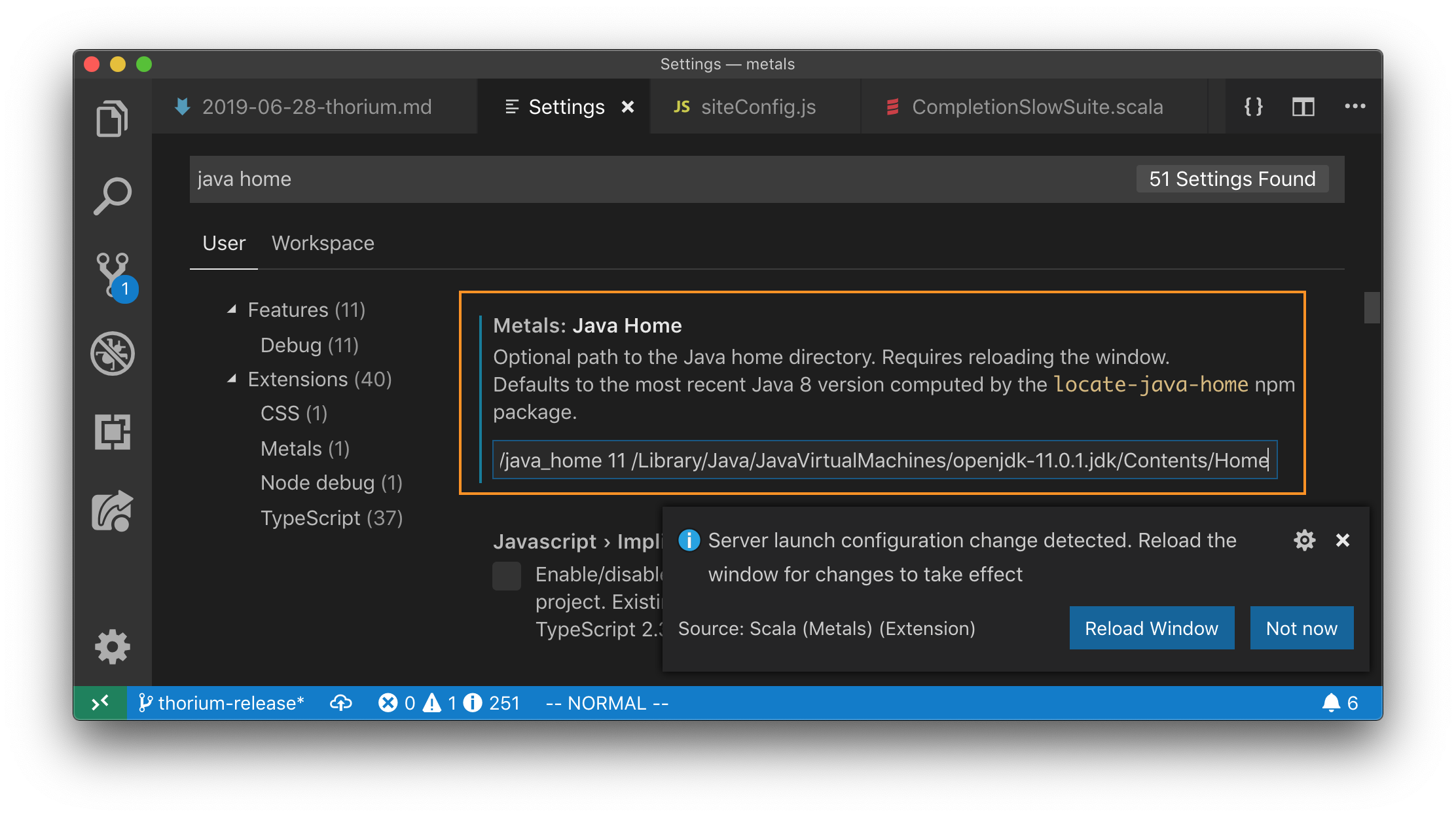 To obtain the Java 11 home on macOS, use the following command:

Big thanks to @er1c for pushing for the effort on both the Bloop and Metals side to support Java 11!

Previously, to support fuzzy symbol search Metals indexed classpath elements using an algorithm that required a quadratic iteration on the number of characters in classfile names. Now, the fuzzy symbol search algorithm only requires a linear pass on the characters of a classfile name. This optimization resulted in a 2x speedup for indexing a 235Mb classpath in our benchmarks.

Previously, nothing happened when invoking "goto definition" on the symbol definition itself. Now, Metals falls back to "find references" in this situation.

Big thanks to @tanishiking for contributing this new feature!

The Scala versions supported by Metals are now the following.

* Scala 2.11 support will likely stay around for a while given the situation with Spark, Scala Native, Playframework and other libraries and frameworks that have been late to adopt 2.12. Our download numbers show that ~10% of Metals users are still on 2.11. Nevertheless, we encourage our users to upgrade to 2.12 to enjoy a better code editing experience thanks to multiple improvements in the compiler.

No more "work in progress"​

Previously, the Metals website used the "Work-in-progress language server for Scala" tagline to reflect the experimental status of the project. Now, the tagline on the website has been changed to "Scala language server with rich IDE features" to reflect that Metals is used by thousands of developers today for their day-to-day coding.

Big thanks to everybody who contributed to this release, it's amazing we had a couple of new contributors to Metals!