We are excited to announce the release of Metals v0.8.0, codename Cobalt. This release includes a large number of new features and improvements, which have been under development since September 2019.

Metals is a language server for Scala that works with VS Code, Vim, Emacs, Sublime Text, Atom and Eclipse. Metals is developed at the Scala Center and VirtusLab along with contributors from the community. Recently, Metals has also gained support from Lunatech with the contributions from @ckipp01. We are extremely grateful for the growing support from the community and businesses alike, which shows in the number of new contributions and their quality.

Check out https://scalameta.org/metals/ and give Metals a try!

It is now possible to run and test directly from VS Code using the new "Run", "Test", "Debug" and "Debug test" buttons. The debug buttons support debugging with breakpoints. It's possible to insert breakpoints in Java and Scala sources for both workspace sources as well as library dependency sources.

To support other editors please take a look into the documentation on the Metals website.

Known breakpoints limitations we are working on:

Metals now implements the textDocument/implementations LSP endpoint, which enables all supported editors to display a list of all implementations of abstract classes or members.

Finding implementations also works for symbols outside of the workspace, at the price of a small performance penalty for the first invocation.

The work done for this feature was also instrumental for implementing the Rename refactor (see below).

Refactoring support is one of the most requested features in Metals. In this release, we started by implementing the most commonly used refactors: rename and import missing symbol.

We plan to add more common refactors along the way. Make sure to check out the ones that have already been proposed and consider suggesting other refactors that are essential in your development workflow.

Thanks to the implementation of the Go to implementations feature, we were able to work on a proper rename for any workspace symbol that will rename all occurrences of a symbol even if that symbol is a part of a class hierarchy.

There are a couple of cases in which rename might behave differently based on the particular symbol being renamed:

Another refactor that is commonly requested is the ability to fix a compilation error by auto-importing a symbol present on the classpath.

This was previously possible in Metals only during completions, but we were lacking what LSP calls a code action.

Code actions are context-sensitive actions that are proposed to the user in order to fix an error or to perform a relevant refactor.

Thanks to the work of @gabro we now have a basic architecture in place for supporting code actions and we were able to implement this feature.

Thanks to great work by @olafurpg and some additional refinements by @alekseiAlefirov, worksheets are now available in all supported editors.

Worksheets are a way to evaluate code in real time to test and prototype any new features in a simple way. To create a worksheet all that is needed is to create a file with the extension .worksheet.sc within the source directory of your workspace (like /src/main/scala) and Metals will take care of the rest.

There are two ways worksheets are implemented for different editors. One is with an additional extension to LSP called Decoration extension and it's used by Visual Studio Code and coc-metals.

The other way worksheets are implemented for all other editors that don't support the Decoration extension is using workspace/applyEdits and comments with hover for larger results.

In order to make the integration between Bloop and Metals a smoother experience, several new improvements are included in this release. There're based on feedback from users as well us our own experiences while working with Metals and should make the overall experience of importing the build and compiling much better.

SemanticDB is resolved inside Bloop​

Metals requires the SemanticDB compiler plugin for a number of features to function properly. Because of that it was quite difficult to add it automatically in all supported build tools even if those supported Bloop itself. Perfect examples are Seed and Fury, which use Bloop to compile code, however adding a plugin automatically would require changes to their core code.

Currently, thanks to recent changes, Metals can send information about the SemanticDB version, which Bloop uses to automatically download and configure the SemanticDB scalac plugin. Thanks to that no changes in the build tool itself are needed. Particular changes in regards to build tools are:

Switch to to using Bloop Launcher​

Instead of using internal Metals logic, we now use the Bloop Launcher, which enables us to either connect to an existing Bsp server or start a new Bloop instance with the specified version if none is running. This greatly simplified the connection to Bloop and enabled us to work on further improvements.

Whenever Metals is started and connects to the Bloop build server it receives information about the version it is running. We compare that version to the one needed by Metals to make sure everything is properly working. If the current running version is older we offer to automatically restart it with the newer version. However, this may not work if Bloop was installed manually.

Automatically reconnect to Bsp/Bloop if connection is broken​

There were numerous issues reported that the connection to Bps or Bloop was being lost, which causes Metals to behave erratically due to no compilation being run. To solve this, we now detect if the connection is closed and offer the user the option of automatic reconnection. This works both when the build server was down and when the connection was just interrupted. It should also solve the issues on MacOs with dropped connection.

Completion to add all abstract members​

Thanks to recent work by tanishiking Metals now supports auto completing scaladoc for method definition and class definition on typing /**. More details about it can be found in the pull request.

Better support for Vim via coc-metals​

In order to better support the Vim experience with Metals, coc-metals extension was created which is an extension for coc.nvim, the most popular LSP client for Vim and Neovim. With this new extension comes a whole bunch of new features for Metals + Vim users. 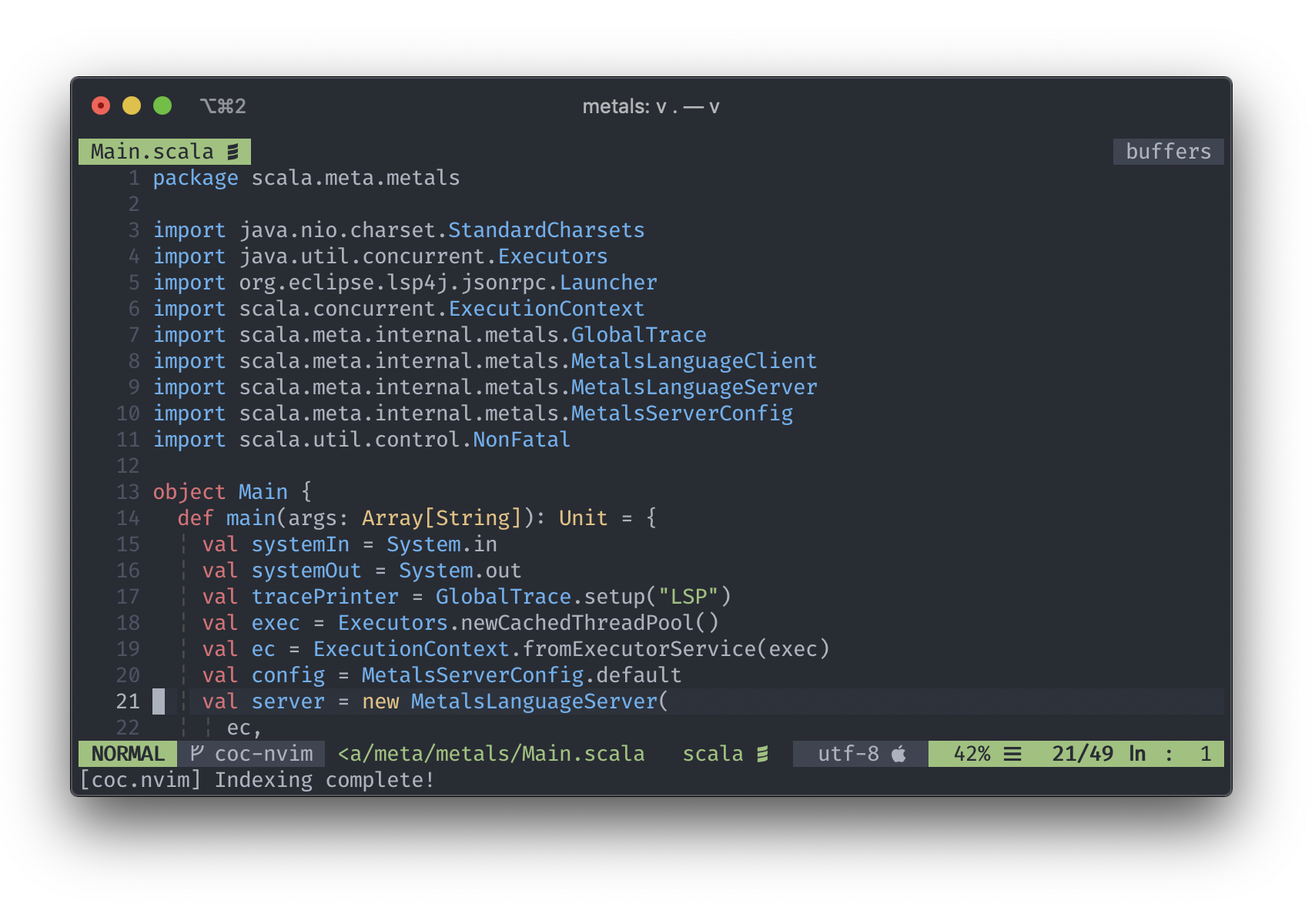 Thanks to @isomarcte we now also run all tests on JDK 11, which enables us to be more confident about the support for it. With some additional changes to the documentation we now can fully claim that support for JDK 11 is available.

This version includes approximately 25% of the Metals git commit log, which makes it impossible to explain every possible improvement in these release notes. Some other features and fixes that we should mention are: