As of this last Metals release, it's now 100% possible to fully configure Metals without any need to pass in server properties. Depending on your editor of choice, the process to configure Metals may be completely abstracted away. You simply click install, wait a bit, and start coding. In this post I'd like to talk a bit about the progression of how Metals was originally configured fully with server properties and how it can now be fully configured via the client, which in LSP terms is your editor. This can serve both as a guide for those client extension maintainers out there and also those curious at how Metals correctly works for all the various editors.

Looking back to the Fall of 2018, you see a giant glimpse of Metals becoming what it is today when looking at a giant commit by @olafurpg with the title Implement pretty basic language server and build client.. It's a pretty fascinating commit to look at if you're interested in the beginnings of Metals, but I want to focus in on a specific file that still exists today, which is the MetalsServerConfig.scala. In this file you see the first configuration options that existed for Metals. You see things like isLogShowMessage to ensure users were correctly getting status messages instead of everything just going into the logs. (This was also before metals/status existed which is used today for a better status experience in Metals). You also see other options like isHttpEnabled for Metals to start the Doctor for those that needed an HTTP client interface, or even an icons setting to ensure things looked nice and matched your client. At this point, instead of just having the user specify every one of these when they bootstrapped the server, a metals.client property was introduced that we could give editors a set of defaults. Here is an example for the first settings for Vim and Metals using the vim-lsc plugin:

The property would then be set when the user would bootstrap Metals. This started out as a manual process for almost all the editors utilizing Coursier. This still actually remains a valid way to configure Metals, although not recommended if your client supports setting InitializationOptions in the initalize request. It's also almost the identical process that happens behind the scenes when client extensions like metals-vscode, coc-metals, and metals-sublime bootstrap the server for you. For example, here is how you would manually do this:

In the above example, you would then get the defaults specified in MetalsServerConfig.scala for emacs. Again, when the process is automated it's very similar, and you can see this if you poke around the fetchAndLaunchMetals function in the VS-Code extension. You can see how the path to Coursier is grabbed, your JAVA_HOME is captured, and how we get some extra variables/properties to call Metals with.

Apart from server properties, it was also necessary for users to be able to easily change a setting, even while in the editor. For example, we have a current setting metals.superMethodLensesEnabled which when enabled will display a code lens that when invoked will either go to the parent class containing the definition of the method or symbol or display the full method hierarchy allowing you to choose where to go.

Here is an example of what this looks like in Vim: 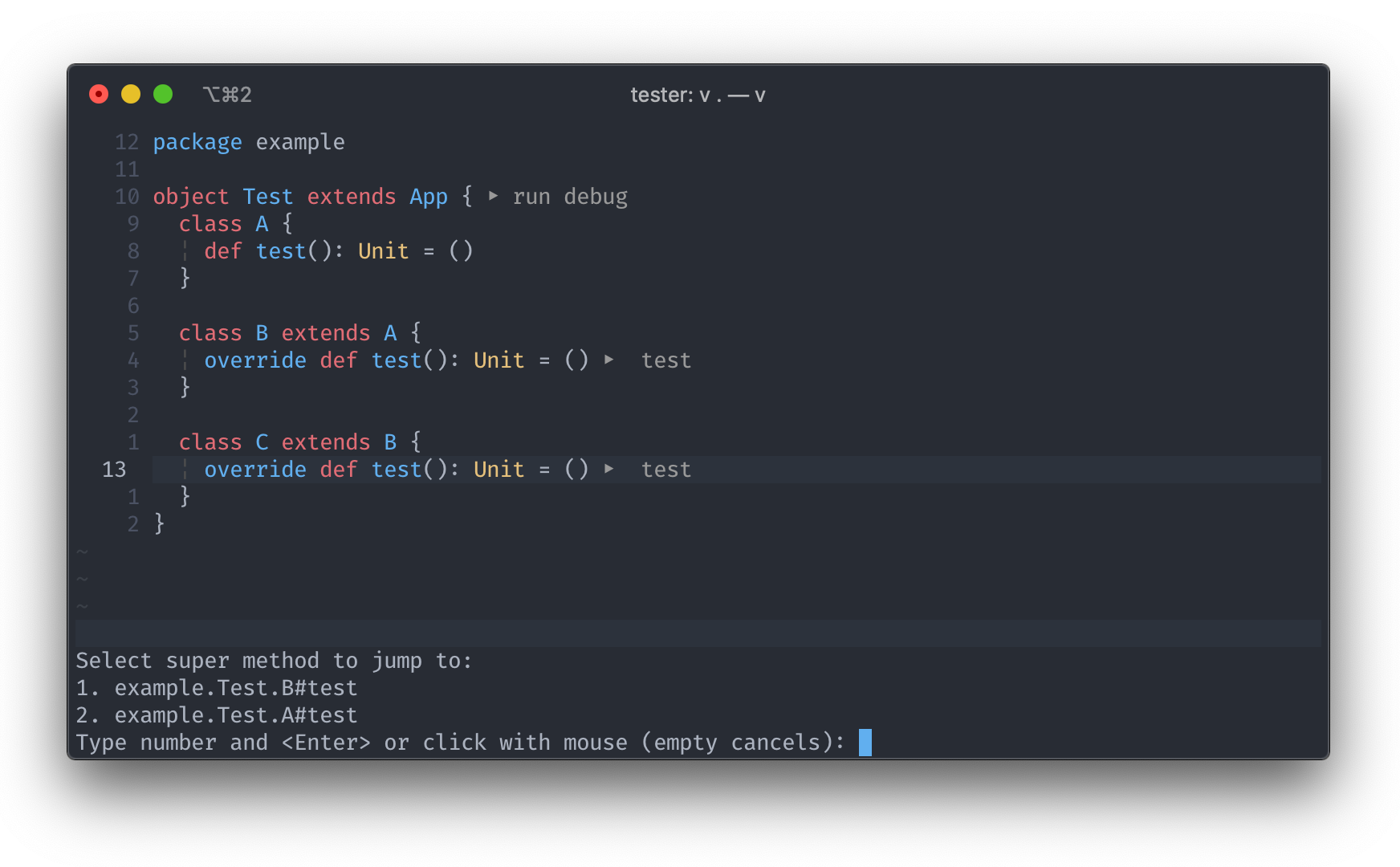 Being able to customize the server with properties and allowing users to pass in some configuration values worked great. However, once Metals started creating LSP extensions for functionality that wasn't supported fully just by LSP, then a way was needed for the client to express that it supported these extensions. This is when Metals started to use the ClientCapabilities.experimental field which the client needed to declare support the extension. You can see the first inklings of this when the Tree View Protocol was introduced here in this commit. This then continued to be further expanded as we introduced more extensions.

As it became easier for various clients to set this, we slowly started to migrate other options that could only be previously set via server properties to ClientCapabilities.experimental. So settings like which format you'd like the Doctor to return could now be set directly by the client without need to bootstrap the server with a specific property. This allowed for much easier configuration than was previously had.

Once it was clear that configuring Metals via the client was desirable, a closer look was taken at InitializationOptions that can be passed in during the initialize request. Since any value is able to be passed in this way, a decision was made to fully migrate all the possible settings that were previously set as server properties (except a select few that we'll touch on later), and also move all the of settings that could be set under experimental to InitializationOptions as well. This ultimately allows for clients to fully configured Metals via InitializationOptions without the need to set any server properties. In theory this also meant that you could not use the same Metals executable for VS Code, Vim, or Emacs since the server is fully being configured by the client itself. The current settings that can be passed in and their defaults are explained in detail here on the website, but the interface is as follows:

You'll notice that this allows for a much finer grained configuration if the client chooses to set certain values. Everything from whether or not the Scala Presentation Compiler should populate the SignatureHelp.documentation to whether or not the editor supports opening a new window after using the metals.new-scala-project command can now be easily configured. Fully configuring Metals through InitializationOptions is now the recommended way to configure Metals.

Are there still server properties?​

As of Metals 0.9.2 it's fully possibly for all clients to use a default bootstrapped Metals that can fully be configured via InitializationOptions. There is a freshly updated Integrating a new editor section on the website to help explain how to exactly configure a client for usage with Metals. As always, don't hesitate to reach out on any of the various channels located in the footer or submit an issue to either improve documentation or to log a bug. Also as a reminder, there is a separate repo for metals-feature-requests.