We're happy to announce the release of Metals v0.11.0! Due to the number of changes in this release we decided to introduce one more minor version before Metals 1.0.0, which is planned to come this year.

In addition to the recently added semanticdb, tasty and javap functionalities, thanks to the efforts of Arthurm1, it's now possible to decompile class files using Lee Benfield's CFR (Class File Reader).

CFR decompiles class files to java, which is much more readable than using javap.

In the future this might help in go to definition for jars that do not have a corresponding source jar, which is what Metals uses today.

This can be added as a new command for the users to invoke.

In one of the last releases v0.10.8 we added the ability to inspect the type of an expression that is currently selected. We are happy to announce that this functionality is now also available for Scala 3, which is thanks to the continued effort of the team to bring the users the best Scala 3 experience possible.

Previously if you wanted to use sbt as your build server instead of the default Bloop you'd need to ensure a .bsp/sbt.json file existed before you tried to switch your build server. We originally created the metals.generate-bsp command for this, but realized this potentially forced extra steps on the user. To make this simpler, now even if no BSP entry exists for sbt and you attempt to switch your build server to sbt via the metals.bsp-switch command, we'll either use the existing .bsp/sbt.json file if one exists or automatically generate it (needs at least sbt 1.4.1) for you and then switch to it.

Recently Mill has complete revamped their BSP implementation allowing for a much better experience for Metals users. Just like sbt, you can now use the metals.bsp-switch command to use Mill as your BSP server (needs at least Mill 0.10.0-M4). Keep in mind that the BSP support in Mill is still a work-in-progress. If you are interested in Mill BSP and you're a Metals user, feel free to include your input here as they are requesting feedback on improving the experience.

In this release we introduce a new code action that allows users to automatically extract method parameter to a separate value.

For example in a invocation such as:

when user invokes the new code action they will see:

This should work correctly for both Scala 2 and Scala 3, in which case it will try to maintain your coding style even if a block is needed.

One important limitation is that this new code action doesn't allow extracting lambdas or partial functions, as this has the potential of breaking your code.

Based on the work of ckipp01 in one of the previous releases it's now possible to invoke a command to run anything in the current file. This means that if we use this new command anything that is located within the currently focused file, whether it's tests or a main class, will be properly discovered and run.

In Visual Studio Code this replaces the previously default config generation and now if no launch.json is specified in the workspace, any file can be run using the default run command (F5).

Code Lenses are still the default in other editors and can be brought back by setting "metals.testUserInterface": "Code Lenses"

Go to definition via links for synthetic decorations.#

Since Metals v0.9.6 it's possible to show additional information about sythetic code that is being generated by the compiler. This includes implicit parameters, classes and conversions. It wasn't however possible to find their definitions. This limitation was mostly due to the lack of proper UI options in different editors.

Recently, we've managed to work around it by using command links that can be rendered in the hover and will bring the user to the right definition.

Thanks to the the effort led by Arthurm1 Metals now supports a subset of features for Java files and even Java only build targets. Currently the biggest missing piece is interactive compiler that would allow us to properly support features such as completions, hover or signature help.

This was possible thanks to using the Java semanticdb plugin included in lsif Java project from sourcegraph and especially the work by olafurpg.

These functionalities will also now work thanks to dos65's work in dependency sources.

We are still missing some of the interactive features such as:

An important note to make is that, while we still want to support some more features, Metals is not a Java language server, so we will never offer the same amount of functionality as the tools and IDEs focused on the Java language. Current discussion about the scope of Java support can be found in this issue. Especially, we will most likely not support any more advanced refactorings or presentation compiler functions.

Visual Studio Code: In case you want to use Metals in a Java only workspace it's now also possible to start Metals using a new Start Metals button in the the Metals tab. We don't want to start Metals as a default in such cases as some other language server might be more suitable.

Due to the other changes in this release the Metals Doctor needed to be reworked to better show the different targets that are available in the workspace as well as try to explain a bit better what is supported and why it might not work. 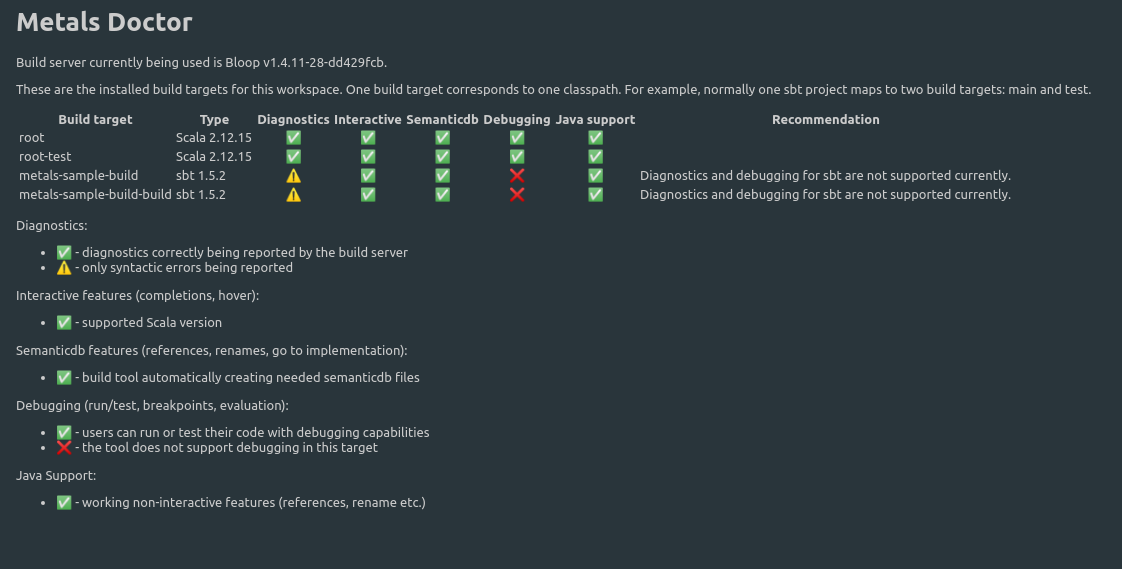 The type column can now have 3 different values Scala <version>, sbt <version> or Java. We also replaced some of the columnsm which are now:

You can always look for explanation of these statuses underneath the table or on the right in the Recommendation column.

If you are using the json output method for the doctor, you will need to modify the way it's displayed according to this.