Whenever you are stuck or unsure, please open an issue or ask on Gitter. This project follows Scalameta's contribution guidelines.

You will need the following applications installed:

This git repository has a pre-push hook to run Scalafmt.

The CI also uses Scalafix to assert that there a no unused imports. To automatically remove unused imports run sbt scalafixAll. We don't run Scalafix as a pre-push git hook since starting sbt takes a long time.

The improvement you are looking to contribute may belong in a separate repository:

Every test suite that extends LspSuite generates a workspace directory under tests/unit/target/e2e/$suitename/$testname. To debug why a LspSuite might be failing, run the test once and then open it directly in your editor. For example, for the test case "deprecated-scala" in WarningsLspSuite run the following command:

If you are using VS Code, make sure to update the "Server Version" setting to use your locally published version of Metals.

Some functionality is best to manually test through an editor. A common workflow while iterating on a new feature is to run publishLocal and then open an editor in a small demo build.

Install the Metals extension from the Marketplace by searching for "Metals".

Click here to install the Metals VS Code plugin

Next, update the "Server version" setting under preferences to point to the version you published locally via sbt publishLocal. 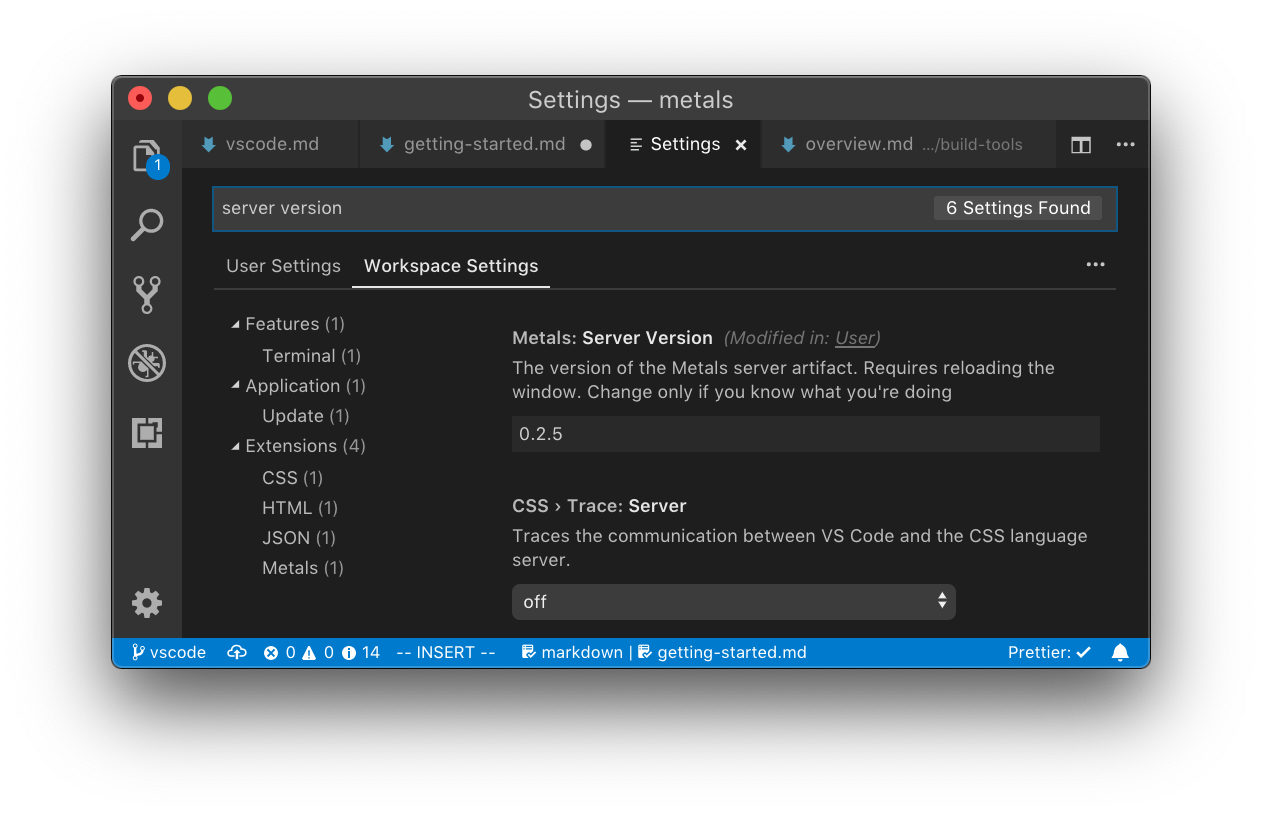 When you make changes in the Metals Scala codebase

It's important to note that sbt publishLocal will create artifacts only for the Scala version currently used in Metals and trying to use the snapshot version with any other Scala version will not work. In that case you need to run a full cross publish with sbt +publishLocal.

If you publish again, you then just need to execute the metals.restartServer command.

If you are using another Vim client, write a new-metals-vim script that builds a new metals-vim bootstrap script using the locally published version.

NOTE if you're able to configure your client using initialization options, then the client property is not necessary. You can see all the options here.

cd test-workspace # any directory you want to manually test Metals
new-metals-vim && vim build.sbt # remember to have the script in your $PATH

These logs contain information that may be relevant for regular users.

To see trace of incoming/outgoing JSON communication with the text editor or build server, create empty files in your machine cache directory.

Next when you start Metals, watch the logs with tail -f.

The traces are very verbose so it's recommended to delete the files if you are not interested in debugging the JSON communication.

To debug the JVM with the Metals server, add a property to your Server Properties with the usual Java debugging flags, making sure you have the quiet option on. It's important to remember about the flag, as the server uses standard input/output to communicate with the client, and the default output of the debuggee interferes with that.

This property will make your server run in debug mode on port 5005 without waiting for the debugger to connect:

The easiest way to update the sbt-launcher is with the following coursier command:

This will allow you to not have to do some of the manual steps with the launcher properties file listed here.