Metals works with Atom thanks to the ide-scala package.

Java 8 or 11 provided by OpenJDK or Oracle. Eclipse OpenJ9 is not supported, please make sure the JAVA_HOME environment variable points to a valid Java 8 or 11 installation.

macOS, Linux or Windows. Metals is developed on macOS and every PR is tested on Ubuntu+Windows.

Once the requirements are satisfied, we can now proceed to install the following packages:

The first time you open Metals in a new workspace it prompts you to import the build. Click "Import build" to start the installation step.

Once the import step completes, compilation starts for your open *.scala files.

Once the sources have compiled successfully, you can navigate the codebase with goto definition.

By default, Metals runs an embedded sbt-launch.jar launcher that respects .sbtopts and .jvmopts. However, the environment variables SBT_OPTS and JAVA_OPTS are not respected.

Update the server property -Dmetals.sbt-script=/path/to/sbt to use a custom sbt script instead of the default Metals launcher if you need further customizations like reading environment variables.

The "Import build" step can take a long time, especially the first time you run it in a new build. The exact time depends on the complexity of the build and if library dependencies need to be downloaded. For example, this step can take everything from 10 seconds in small cached builds up to 10-15 minutes in large uncached builds.

Consult the Bloop documentation to learn how to speed up build import.

When you change build.sbt or sources under project/, you will be prompted to re-import the build. 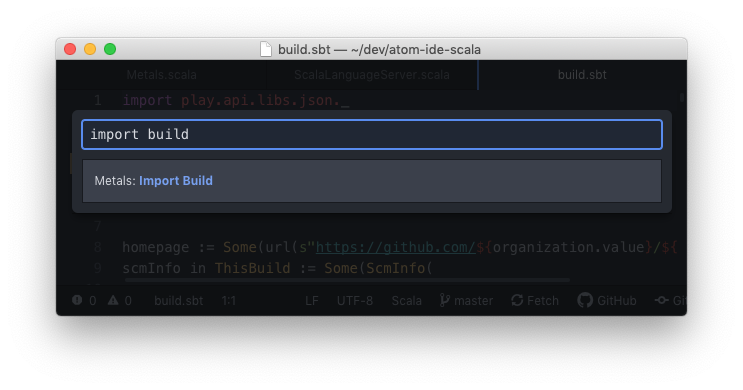 Execute the "Run Doctor" through the command palette to troubleshoot potential configuration problems in your workspace. 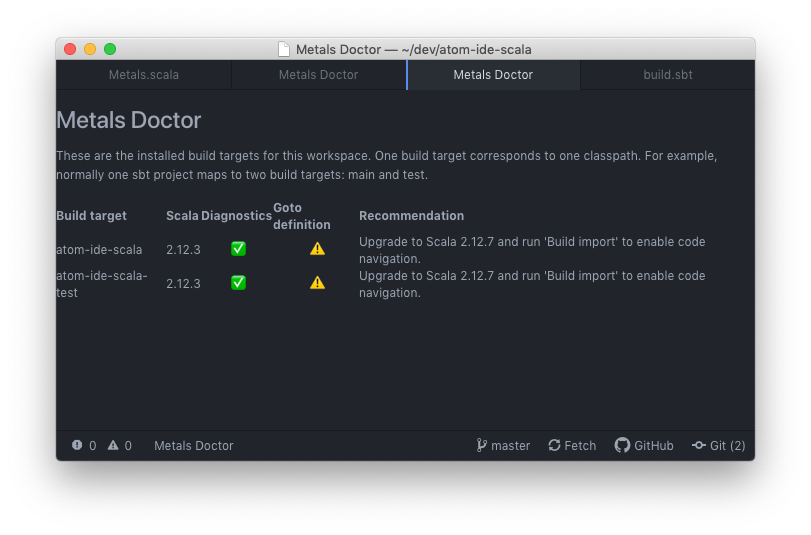 Update the "Metals version" setting to try out the latest pending Metals features.

Run the "Reload Window" command after updating the setting for the new version to take effect.

Files and Directories to include in your Gitignore

The Metals server places logs and other files in the .metals directory. The Bloop compile server places logs and compilation artifacts in the .bloop directory. The Bloop plugin that generates Bloop configuration is added in the metals.sbt file, which is added at project/metals.sbt as well as further project directories depending on how deep *.sbt files need to be supported. To support each *.sbt file Metals needs to create an additional file at ./project/project/metals.sbt relative to the sbt file. Working with Ammonite scripts will place compiled scripts into the .ammonite directory. It's recommended to exclude these directories and files from version control systems like git.

Worksheets are a great way to explore an api, try out an idea, or code up an example and quickly see the evaluated expression or result. Behind the scenes worksheets are powered by the great work done in mdoc.

Getting started with Worksheets

To get started with a worksheet you can either use the metals.new-scala-file command and select Worksheet or create a file called *.worksheet.sc. This format is important since this is what tells Metals that it's meant to be treated as a worksheet and not just a Scala script. Where you create the script also matters. If you'd like to use classes and values from your project, you need to make sure the worksheet is created inside of your src directory. You can still create a worksheet in other places, but you will only have access to the standard library and your dependencies.

After saving you'll see the result of the expression as a comment as the end of the line. You may not see the full result for example if it's too long, so you are also able to hover on the comment to expand.

Keep in mind that you don't need to wrap your code in an object. In worksheets everything can be evaluated at the top level.

You are able to include an external dependency in your worksheet by including it in one of the following two ways.

:: is the same as %% in sbt, which will append the current Scala binary version to the artifact name.