Java 8, 11, 17 provided by OpenJDK or Oracle. Eclipse OpenJ9 is not supported, please make sure the JAVA_HOME environment variable points to a valid Java 8, 11 or 17 installation.

macOS, Linux or Windows. Metals is developed on many operating systems and every PR is tested on Ubuntu, Windows and MacOS.

Note that 2.11.x support is deprecated and it will be removed in future releases. It's recommended to upgrade to Scala 2.12 or Scala 2.13

or via the VS Code editor:

Next, open a directory containing your Scala code. The extension activates when the main directory contains build.sbt or build.sc file, a Scala file is opened, which includes *.sbt, *.scala and *.sc file, or a standard Scala directory structure src/main/scala is detected. The first time you open Metals in a new workspace it prompts you to import the build. Click "Import build" to start the installation step.

Once the import step completes, compilation starts for your open *.scala files.

Once the sources have compiled successfully, you can navigate the codebase with goto definition.

By default, Metals runs an embedded sbt-launch.jar launcher that respects .sbtopts and .jvmopts. However, the environment variables SBT_OPTS and JAVA_OPTS are not respected.

Update the "Sbt Script" setting to use a custom sbt script instead of the default Metals launcher if you need further customizations like reading environment variables.

The "Import build" step can take a long time, especially the first time you run it in a new build. The exact time depends on the complexity of the build and if library dependencies need to be downloaded. For example, this step can take everything from 10 seconds in small cached builds up to 10-15 minutes in large uncached builds.

Consult the Bloop documentation to learn how to speed up build import.

When you change build.sbt or sources under project/, you will be prompted to re-import the build.

Execute the "Run Doctor" through the command palette to troubleshoot potential configuration problems in your workspace.

The VS Code plugin uses by default the JAVA_HOME environment variable (via locate-java-home) to locate the java executable. To override the default Java home location, update the "Java Home" variable in the settings menu. 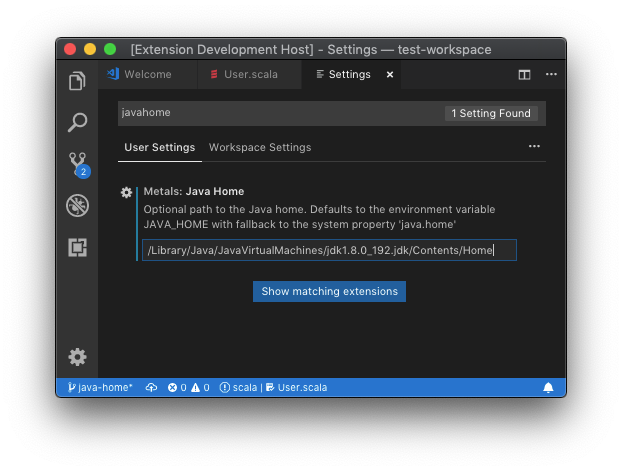 If this setting is defined, the VS Code plugin uses the custom path instead of the JAVA_HOME environment variable.

To globally configure $JAVA_HOME for all GUI applications, see this Stackoverflow answer.

If you prefer to manually configure Java home through VS Code, run the following command to copy the Java 8 home path.

Use the 'Custom Repositories' setting for the Metals VS Code extension to tell Coursier to try to download Metals artifacts from your private artifact repository.

Metals uses Coursier to download artifacts from Maven Central. To use Metals behind an HTTP proxy, configure the system properties -Dhttps.proxyHost=… -Dhttps.proxyPort=… in one of the following locations:

Update the "Server Version" setting to try out the latest pending Metals features.

Run the "Reload Window" command after updating the setting for the new version to take effect.

Files and Directories to include in your Gitignore​

The Metals server places logs and other files in the .metals directory. The Bloop compile server places logs and compilation artifacts in the .bloop directory. The Bloop plugin that generates Bloop configuration is added in the metals.sbt file, which is added at project/metals.sbt as well as further project directories depending on how deep *.sbt files need to be supported. To support each *.sbt file Metals needs to create an additional file at ./project/project/metals.sbt relative to the sbt file. Working with Ammonite scripts will place compiled scripts into the .ammonite directory. It's recommended to exclude these directories and files from version control systems like git.

Run the "Explorer: Focus on Outline View" command to open the symbol outline for the current file in the sidebar.

Run the "Open Symbol in File" command to search for a symbol in the current file without opening the sidebar. 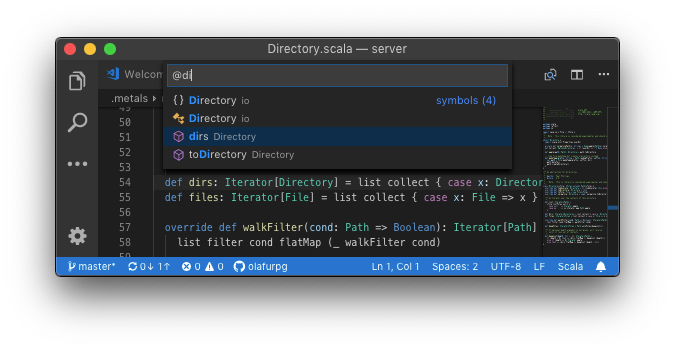 As you type, the symbol outline is also visible at the top of the file.

Metals has the ability to display code lenses that, when invoked, will go to the parent class that contains the definition of the method or symbol. Unfortunately, it might cause some lag in larger code bases, which is why it is not enabled currently by default.

To enable the feature you need to modify the setting metals.superMethodLensesEnabled to true.

Even without using the code lenses it's still possible to navigate the method hierarchy using two commands:

You can also bind those commands to a shortcut.

It is possible using Metals to easily setup a new project using the exiting giter8 templates. This is an equivalent to the sbt new command, which uses the same mechanism. There is a great number of templates already available and it should be easy to find something for yourself. To start the setup you can use the Metals: New Scala project command, which works as following:

The same command will be invoked when clicking the "New Scala Project" button in the Metals view.

If you feel like a template should be included in the default displayed ones do not hesitate to create a PR or file an issue.

Running and debugging your code​

Metals supports running and debugging tests and main methods via the Debug Adapter Protocol. The protocol is used to communicate between the editor and debugger, which means that applications can be run the same as for any other language in the natively supported Run view. When using Metals the debugger itself is Bloop, which is also responsible for starting the actual process.

Users can begin the debugging session in two ways: 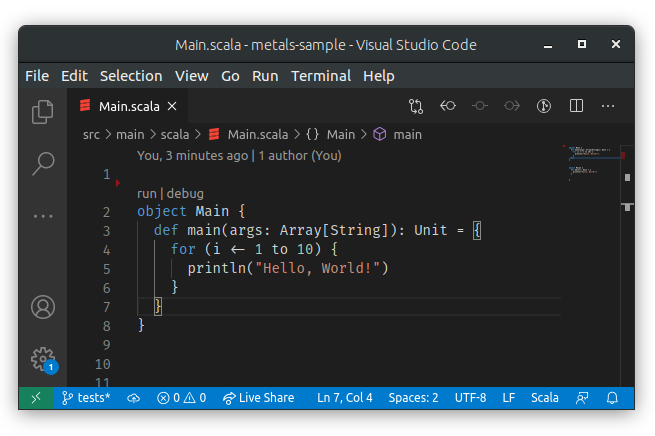 For each main or test class Metals shows two code lenses run | debug or test | test debug, which show up above the definition as a kind of virtual text. Clicking run or test will start running the main class or test without stopping at any breakpoints, while clicking debug or test debug will pause once any of them are hit. It's not possible to add any arguments or java properties when running using this method.

via a launch.json configuration​

If a user doesn't have anything yet saved, a configuration wizard will pop up to guide them. In the end users should end up with something like this:

You can also add an optional build target name, which is needed in case there are more than one class with the same name or when launching a class from outside the project. Inside "configurations": add the key buildTarget with your target name, e.g. root:

The build target name corresponds to your project name. For example in sbt for lazy val interfaces = project the name of the build target will be interfaces for sources and interfaces-test for tests. To make sure you have the correct target names please run the command Metals: Run Doctor.

Multiple configurations can be stored in that file and can be chosen either manually in the Run view or can be picked by invoking a shortcut defined under workbench.action.debug.selectandstart.

You can also use commands that can be easily bound to shortcuts:

To properly support adding | in multiline strings we are using the onTypeFormatting method. The functionality is enabled by default, but you can disable/enable onTypeFormatting inside Visual Studio Code settings by checking Editor: Format On Type: 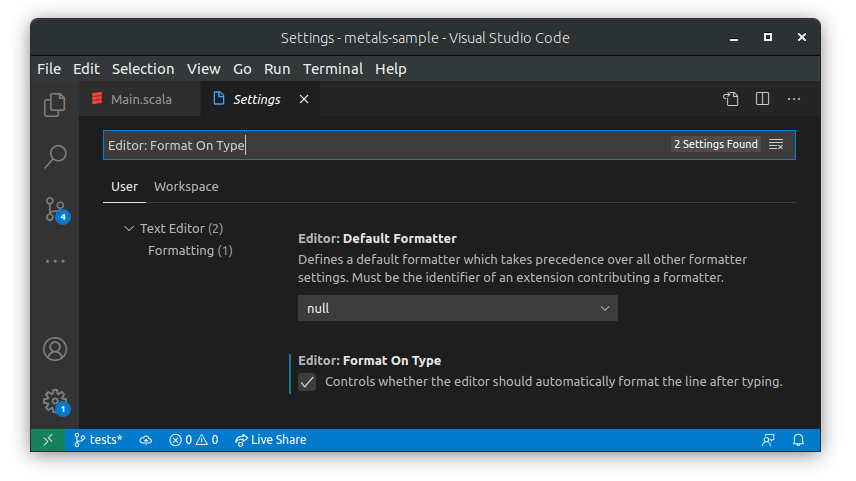 Formatting on paste for multiline strings​

Whenever text is paste into a multiline string with | it will be properly formatted by Metals:

This feature is enabled by default. If you need to disable/enable formatting on paste in Visual Studio Code you can check the Editor: Format On Paste setting: 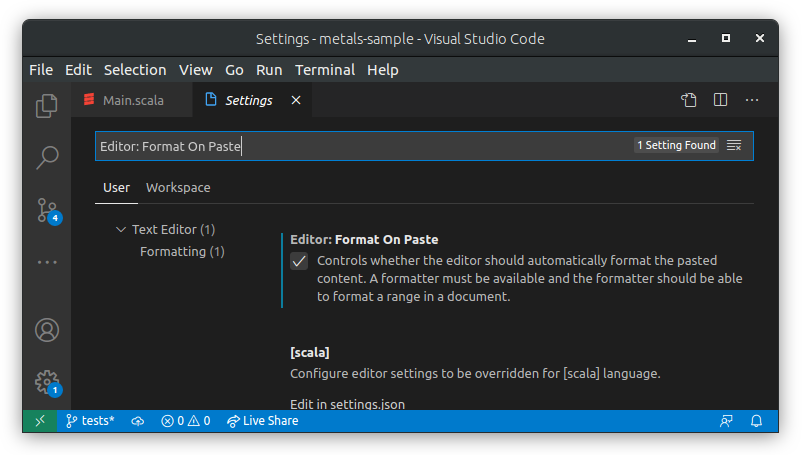 Worksheets are a great way to explore an api, try out an idea, or code up an example and quickly see the evaluated expression or result. Behind the scenes worksheets are powered by the great work done in mdoc.

Getting started with Worksheets​

To get started with a worksheet you can either use the metals.new-scala-file command and select Worksheet or create a file called *.worksheet.sc. This format is important since this is what tells Metals that it's meant to be treated as a worksheet and not just a Scala script. Where you create the script also matters. If you'd like to use classes and values from your project, you need to make sure the worksheet is created inside of your src directory. You can still create a worksheet in other places, but you will only have access to the standard library and your dependencies.

After saving you'll see the result of the expression as a decoration at the end of the line. You may not see the full result for example if it's too long, so you are also able to hover on the decoration to expand the decoration.

Keep in mind that you don't need to wrap your code in an object. In worksheets everything can be evaluated at the top level.

You are able to include an external dependency in your worksheet by including it in one of the following two ways.

:: is the same as %% in sbt, which will append the current Scala binary version to the artifact name.

You can also import scalac options in a special $scalac import like below:

Scalafix allows users to specify some refactoring and linting rules that can be applied to your codebase. Please checkout the scalafix website for more information.

Since Metals v0.11.7 it's now possible to run scalafix rules using a special command metals.scalafix-run. In VS Code can be also run using the default shortcut of shift + alt + ctrl + o. This should run all the rules defined in your .scalafix.conf file. All built-in rules and the community hygiene ones can be run without any additional settings. However, for all the other rules users need to add an additional dependency in the metals.scalafixRulesDependencies user setting. Those rules need to be in form of strings such as com.github.liancheng::organize-imports:0.6.0, which follows the same convention as coursier dependencies.

A sample scalafix configuration can be seen below:

Searching a symbol in the workspace​

Metals provides an alternative command to the native "Go to symbol in workspace..." command, in order to work around some VS Code limitations (see this issue for more context) and provide richer search capabilities.

You can invoke this command from the command palette (look for "Metals: Search symbol in workspace"). Optionally you can also bind this command to a shortcut. For example, if you want to replace the native command with the Metals one you can configure this shortcut:

Test Explorer UI is a new default way to run/debug test suites and replaces Code Lenses. The new UI adds a testing view, which shows all test suites declared in project's modules. From this panel it's possible to

If you encounter an error, create an issue.

Install the IntelliJ IDEA Keybindings extension to use default IntelliJ shortcuts with VS Code.